Know your borehole: A hydrogeologist’s perspective

Recognition of groundwater’s contribution to water supply, including garden irrigation, crop irrigation, stock watering, potable and town supply, is ever increasing. This is driven by inconsistent rainfall patterns, climate change and an increase in water demand. With drill rigs of all shapes and sizes running around between drill sites, it is appropriate that we spend some time outlining some important aspects regarding a successful borehole – it goes beyond just selecting the correct drill site!

2. Groundwater (What is groundwater?)

To understand the presence of groundwater, it is best to think of it in terms of its place in the water cycle (Figure 1). At some point in time, almost all groundwater was once rainfall that landed on the earth’s surface. Most of this rainfall then flowed down-gradient in small streams and rivers to eventually fill dams or reach the sea. Some of it evaporated back up into the atmosphere, while importantly, some rainfall infiltrated into the soil and rocks below the surface. The water that infiltrates below the surface accumulates becoming groundwater. Groundwater is stored and transmitted between soil, sediment or rock particles called pore spaces or interstices, and when available in meaningful quantities constitutes an aquifer.

There are three main types of aquifer, namely; a primary aquifer, where groundwater flows in pore spaces between sedimentary material (e.g. in loose sands), a secondary or fractured aquifer where groundwater occurs in fractures within the bedrock and a karst aquifer where groundwater is stored and flows through dissolution cavities (typically associated with limestone and dolomite rock). In a South African context, fractured aquifers are the predominant aquifer type. Fractures intersected during drilling are sometimes informally referred to as “veins”, which is conceptually incorrect if we consider that fracturing and faulting is typically planar and is very seldom tubular (vein like) in shape.

The sustainable yield of a borehole depends on the geological setting and rainfall in the area (with associated recharge to groundwater). The hydraulic conductivity (a property of the sub-surface that describes how transmissive it is) and storativity (analogous to the volume of water stored within an aquifer) are important geological controls on the potential yield of a borehole.

Likewise, the groundwater quality is also controlled by geology and rainfall. Host rock, with associated rock-water chemical interaction, typically determines the quality of the groundwater. Furthermore, in areas where evaporation far exceeds precipitation, groundwater tends to be more saline as the “freshening” effect of recharge is low. 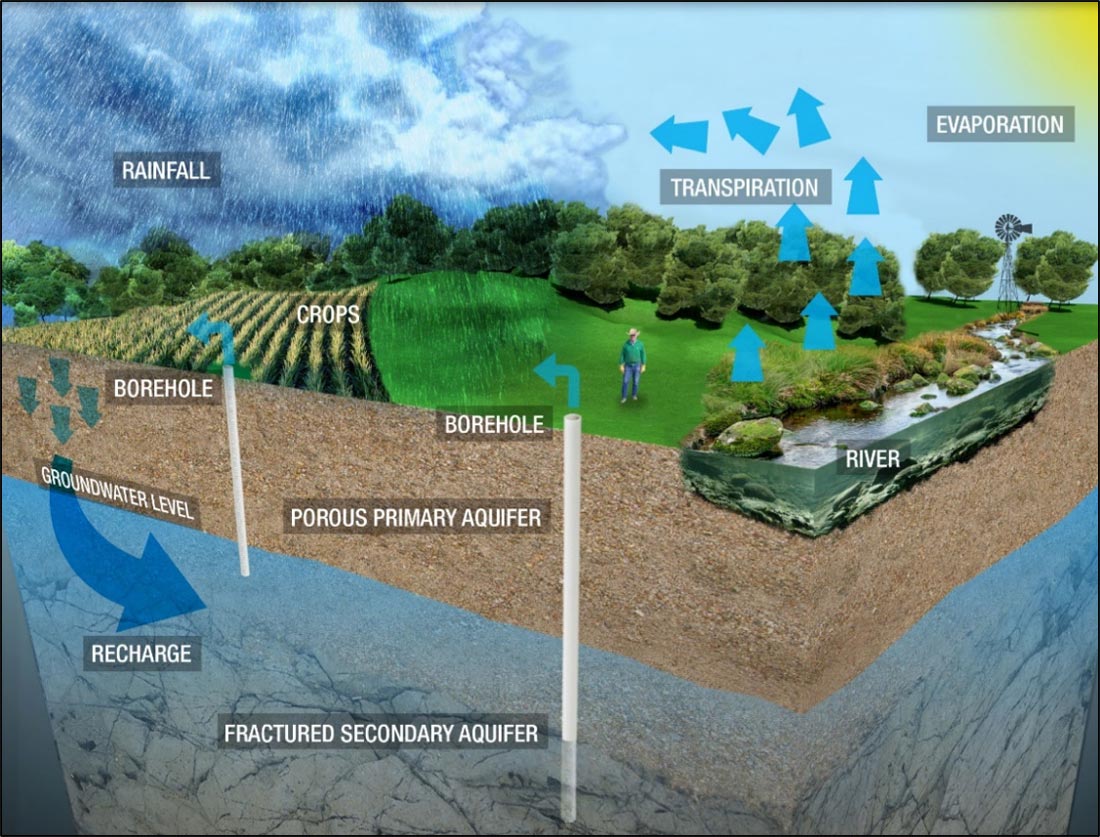 Considering that geology is what controls the potential yield and groundwater quality of an aquifer, this should be the starting point for any groundwater investigation. The selection of the drill target (both spatially and vertically), should therefore not be based on wishful thinking, keft to chance or even geophysics (on its own) – but should be defined based on the geological conceptualisation of the area along with the relevant hydrogeological implications.

To understand the geological setting of an area, detailed geological maps are readily available which can be purchased from geological societies. These maps only provide an indication of what occurs at the earth’s surface in the area of interest and require interpretation from an Earth Scientist with a background in geology. Furthermore, the geologist must be able to conduct field surface mapping to correlate observations with what has been mapped in the area.

Where geological observation and 3d conceptualisation has been undertaken to identify the preferred target, geophysical techniques can be used to further investigate the sub-surface and delineate drill targets. Geophysical science is the study of how different materials of the earth (sands, clays, dense rocks, light rocks, etc.) interact with different signals (e.g. electrical, magnetic, seismic). Examples of common methods used in South Africa in connection to groundwater studies are electrical resistivity methods, electromagnetic methods (Figure 2) and magnetic methods. Typically, geophysical surveys are used to improve understanding of the geology rather than delineating the occurrence of groundwater.

Other than geology and geophysical data obtained in the field, existing borehole information can be very helpful in selecting a drill target and anticipating results. Often a study area already has several boreholes, and all of them (be they high or low yielding) provide an extremely useful data set to aid the geologist in developing a conceptual hydrogeological model prior to defining a final drill position.

In South Africa (and around the globe) boreholes are often drilled based on the suggestions of a water diviner. Water diviners claim to locate underground water based on the way a divining rod (often a wire or branch) moves in their hand as they walk around an area where they expect to find water. While this method may be near and dear to many groundwater users’ hearts, time, experience and controlled testing have shown that a scientific approach using geological mapping, geophysical surveys and sound geohydrological conceptual modelling is more likely to be successful. 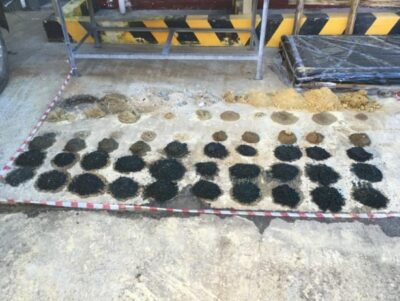 Figure 3a: Neatly set out drill chips, sampled every 1 metres

Despite public perception, drilling a borehole is not a simple task. There are many questions that should be asked of a drilling contractor before a borehole is drilled, and here are but a few of the more important ones: 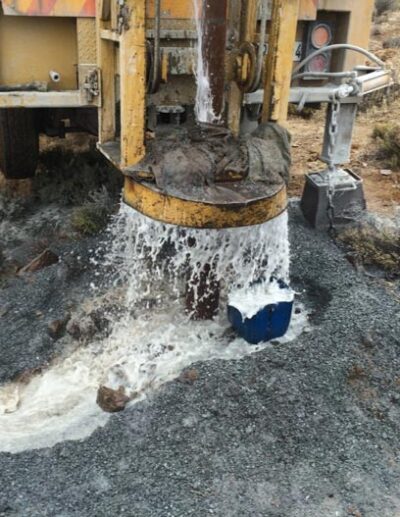 Figure 3b: A small water strike

These questions should be discussed prior to establishment on site,  in consultation with the driller to plan what drilling method and materials are required and suitable to the geological conditions. During the drilling process a sample of the geological formation should be taken every 1 meter and placed neatly in a sample garden (Figure 3a). This helps with the identification of changes in lithology, whether the geological target has been intersected, fracture depths (or zones with increased porosity in a primary aquifer) or any other relevant information. If the drilling intersects sufficient yield from the formation intersected, the borehole should typically be drilled at least 10 meters beyond this depth to act as a sump and ensure the water bearing unit is suitably intersected. Knowledge of the drill target is always important, as in many cases simply drilling deeper is not necessarily the best solution. Drilling is an intrusive activity (Figure 3b), and due caution and awareness is required to avoid potential social and environmental impacts (e.g. silt and dirty water discharge at surface, mixing and contamination of fresh water aquifers by drilling into saline aquifers, and intersection of artesian flows).

When a borehole is drilled, regardless of whether it is deemed to be successful or not, it is important to recognize that the drilling activity has provided a window in the subsurface.  It is therefore very important to keep record of the results, and a comprehensive drill log (Figure 4) should be compiled including the following:

If none of this detail is available of an already drilled borehole, some of the detail can be obtained by means of a down hole camera survey. Camera logging provides useful information in terms of a borehole condition, construction (casing depth), fracture depths and groundwater level etc. 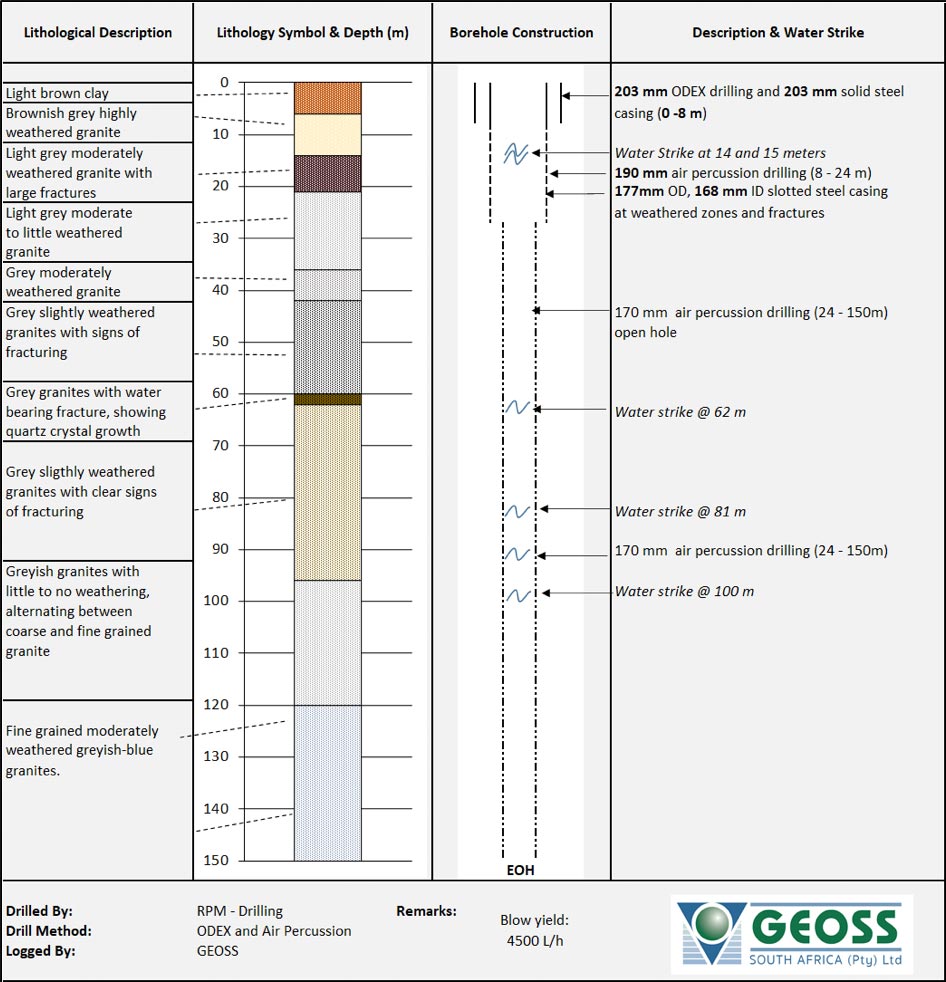 Figure 4: A graphical representation of the borehole conditions

It is important that groundwater development is done scientifically and correctly, including the selection of the drilling position, the actual drilling, the yield testing, the infrastructure installation, monitoring and regulatory compliance. The correct understanding and approach to the borehole positioning and drilling will start your groundwater development process off on the right foot. Combine this with high standards in terms of drilling (Figure 51), and your borehole should be an investment that lasts you a life time. 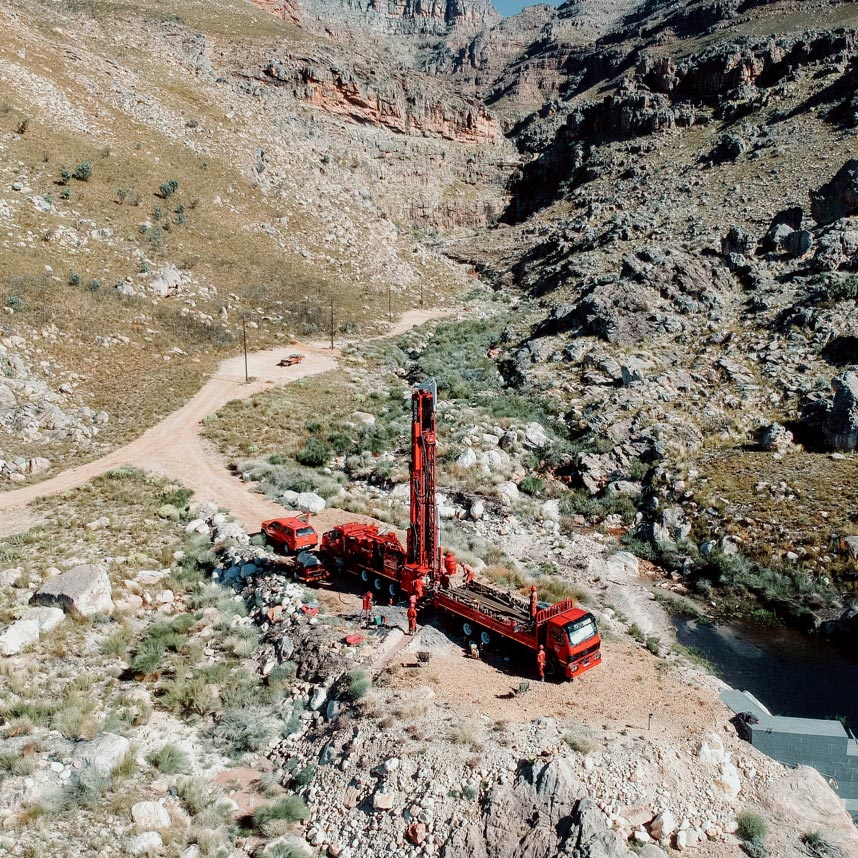 Figure 5: An example of a neat drill site and equipment

[1] The close proximity of the drill site to a drainage channel was taken into account when sitting and drilling this borehole and the borehole was specifically designed to avoid any abstraction of surface water by the borehole.

Thank you for all your assistance with Olive Grove and all the other UTA projects. Was a pleasure working with GEOSS.