This article first appeared in Fresh Quarterly. The Water and irrigation issue 16: 2020 – 03. Written by Anna Mouton

What do half the people and half the crops on earth have in common? Their survival depends on groundwater. 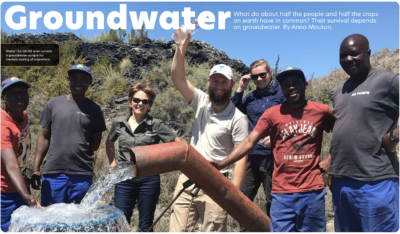 Only about 2.5% of all water on earth is fresh. About 0.9% is brackish. Everything else is seawater.

When we think about freshwater, we tend to picture rivers and dams, but more than two-thirds of all fresh water is frozen in glaciers and ice caps. Only about 1.2% occurs as surface water, and more than two thirds of that is also frozen, as ground ice and permafrost. The remaining fraction includes not only rivers and dams, but atmospheric water and soil moisture, as well as the water in living organisms.

The total available volume of renewable groundwater in South Africa is estimated to be about 19 billion cubic metres per year.

If all the fresh water on earth filled a 20-litre bucket, then surface water would represent a little less than a cup scooped from that bucket. Groundwater, on the other hand, would account for around 30% of the water in the bucket.

Groundwater is defined as water found under the surface of the earth in the saturated zone — soil moisture is not generally considered groundwater. An underground layer of sand or rock that contains water is called an aquifer — the term often implies that the water can be economically exploited.

One way in which geologists classify aquifers is according to the spaces containing the water.

Porous aquifers occur in sand or sandstone. In South Africa, sand aquifers are found along coastal areas, in the Kalahari, and in some river plains. Examples include the Sandveld and Cape Flats aquifers.

Fractured aquifers are cracks and breaks in otherwise relatively impermeable rock. The Table Mountain Group aquifer is an example of a fractured aquifer. It extends from just north of Nieuwoudtville right down to Cape Agulhas, and as far east as Port Elizabeth.

Karst aquifers develop when limestone dissolves to form caves. Although uncommon, these aquifers can yield spectacular quantities of water. For example, the dolomite aquifer underlying Pretoria has supplied millions of litres of water every day since the founding of the city.

How much groundwater do we have?

South African aquifers are estimated to contain about 235 billion cubic metres of groundwater, but most of this cannot be abstracted. Besides limitations imposed by the geology and characteristics of the aquifers, there are also considerations such as avoiding excessive drawdowns.

In the case of karst aquifers, removal of water from an underground cave can lead to collapse of the roof and formation of sinkholes.

Aquifers are also the source of the core flow in most rivers in the Western Cape. Depleting the aquifers reduces flow in rivers.

The yield of an aquifer depends on its geological setting as well as on its characteristics, which include porosity, permeability, transmissivity, and recharge.

Porosity is a measure of the volume of space per volume of sand or rock. The greater the porosity, the more space is available for water.

Permeability is a measure of the number and size of connections between spaces in the sand or rock. An aquifer with high porosity but low permeability will have a low yield because water movement is restricted.

Transmissivity describes the rate of movement of water through the entire aquifer. Low transmissivity will reduce yields by restricting water movement. Water flow rates in fractured aquifers in South Africa are typically a few metres per year.

Recharge is the rate at which water is added to the aquifer. Aquifers are usually recharged by rainfall and other precipitation but can also gain water from rivers and dams, as well as from artificial recharge through water injection.

You can read more about Managed Aquifer Recharge here

Fresh Quarterly spoke with hydrogeologist Julian Conrad of specialist groundwater and earth-sciences consultancy GEOSS to learn how growers should approach drilling for water.

“We start by looking at the geology of an area, to see if there’s any potential for groundwater,”

says Conrad. Although the Department of Water and Sanitation has produced groundwater maps of South Africa, these only provide a rough guide. Exploration for water requires much more detailed information.

Conrad explains that his team would not only consult satellite imagery but also conduct field visits and use instrumentation.

“There’s nothing that can show you where your water is,” he cautions. “You have to understand the geology, identify a good target zone, and then drill.”

Once the borehole produces water, Conrad stresses the importance of determining the safe sustainable yield using the correct scientific methods.

“We want the borehole to last. Once we’ve tested the borehole yield and the quality, we tell the farmer how to operate the borehole. The geology only allows you to abstract groundwater at a certain rate — so the size of your pump must be correct otherwise you will pump your borehole dry. It’s often good practice to let a borehole rest on a daily basis.”

Boreholes have to be licensed. The process depends on region, and unfortunately, the borehole usually has to be in place, and its yield tested before the application can be submitted. “We also need to prove how big the aquifer is, and that the borehole is not impacting springs or rivers, or other legal users,” says Conrad.

Although it might seem risky to incur the cost of establishing a borehole with no guarantee of receiving a licence, Conrad says that applications are rarely rejected. But he points out that applications do take a very long time to process.

Conrad recommends ongoing monitoring of boreholes. He is excited about the improvements in technology, including apps that allow users to monitor their pumps and water levels on their phones.

“I think there’s generally speaking plenty of groundwater still for use, in many areas,” concludes Conrad. “It’s a great resource — but a scientific approach is required for its optimal management.”

If you have any questions about drilling a borehole, borehole yield testing or getting a borehole license please contact GEOSS today info@geoss.co.za

It has been a pleasure working with Geoss. We hope to work together again on future projects.