Everything you need to know about drilling a borehole at home

With the threat of Day zero still looming in parts of South Africa, the question of getting a borehole in your backyard is still on the mind of many concerned citizen wanting to secure their water supply. Whether this is for drinking water, filling up swimming pools or garden irrigation, some questions need to be answered regarding the seemingly mysterious process of getting a borehole. This article aims to demystify some of the questions and problems associated with tapping into the misunderstood and often misrepresented water resource under the ground. 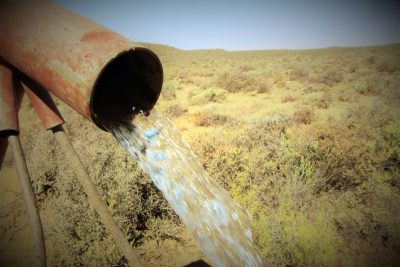 Groundwater flowing out of a borehole that has been drilled by GEOSS in the Karoo.

1. How to know where to drill my borehole?

Groundwater exists in the voids and cavities within the geological formations (sand and rocks) that underlies your property. For each type of rock formation these voids are present in different ways. In sand or clay, the voids are between the sand/clay particles while for hard rock such as granite, shale or sandstone the voids are typically within fractures and fracture networks.

Learn more about the geology of South Africa.

Thus, when a borehole needs to be sited it is important to understand the geology of the area. A regional hydrogeological study conducted by a hydrogeologist will provide insight into the geological setting of the property. This will not only assist with where to drill but will also give an indication of how much water is expected and what the quality of the water will be (and drilling method/borehole construction to be used). Should space allow for it, a geophysical survey can be used to supplement the geological study.

In the case of most residential properties, the question often is not where should I drill but rather where can a drill rig access my site. Drill rigs are typically large machines weighing several tons and are often limited to the driveway of a residential property. In such a case it is important to know the regional geology to determine how much water you can expect and the likely quality in order to decide if it is worth the expense.

2. How much does it cost to drill a borehole?

The cost of drilling is highly variable and often difficult to determine prior to the end of the drilling. The primary cost of drilling is related to the construction of the borehole. Thus, the size and depth of the borehole, the type of casing being installed and the depth of the casing contributes to the highest portion of the final cost. The casing type, casing depth and borehole depth are dictated by the geology as the casing is installed to keep unconsolidated material stable, thus, preventing the hole from collapsing while the borehole depth is often determined by the depth where water is intersected. Both the water strike depth and the thickness of the unconsolidated material is mostly unknown prior to drilling causing variability in the final price of the borehole.

The type and quality of material and final cost of drilling varies between drilling companies. Thus, it is important to understand the drilling conditions and the necessary material needed to drill and construct a borehole that will not only provide sufficient water, but will also last a lifetime.

The best way of achieving this as well as ensuring that the driller complies to the National standard for drilling (SANS 10299-2:2003) is by having a hydrogeologist manage and supervise the drilling process.

Both a borehole and a well point is used to abstract groundwater, however, they differ in several aspects. Well points are only suitable for shallow depths up to 20 meters and can only be installed into unconsolidated material such as sand or clay. A well point is essentially only an abstraction pipe (typically High-Density Poly Ethylene (HDPE) that gets pushed into the ground through a jetting process. Abstraction takes place from the abstraction pipe via a surface-mounted suction pump.

A borehole on the other hand is a hole drilled, with a drilling machine, kept open with either steel or uPVC casings that allow water to flow into the borehole through perforation. The water is typically abstracted from the borehole via a submersible pump installed at depth in the borehole. A borehole can be drilled into both unconsolidated material as well as into solid rock for several hundreds of meters.

4. Will I get more water if I drill deeper?

The general assumption that drilling deeper will mean more water is false. As previously state, groundwater is geologically controlled and thus the optimal drilling depth is to be determined based on the geology. For instance, should the drill target be an unconfined primary sand aquifer, then drilling will stop as soon as competent bedrock is intersected.

In the case of a granite formation, the drill target is often the upper weathered zone of the granite. Thus, each drill site will have a different drill target that is primarily dictated by the geology and it is unlikely that drilling past the target will produce any more water. The recommended drilling depth should be addressed in the hydrogeological study conducted by the hydrogeologist. 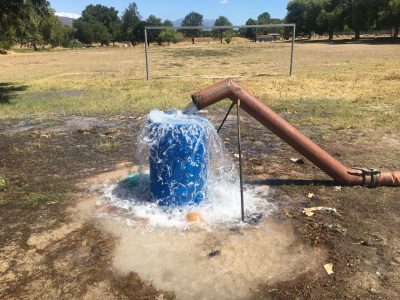 5. What size pump should I buy and how deep should I install it?

Once a borehole has been successfully drilled the next obvious choice would be to install a pump for abstraction. The driller normally provides the client with a blow yield. This yield is often mistakenly used as the sustainable yield of the borehole, resulting in the incorrectly sized pump being installed into the borehole. This can have several negative outcomes including but not limited to over-abstraction of the borehole resulting in burned-out pumps and high electricity bills.

The only way to obtain the correct sustainable yield for the borehole is by doing a yield test according to the National Standards (SANS 10299-4:2003) . For domestic use a six-hour extended step test is sufficient. Should the borehole be used for irrigation of crops or industrial supply the testing duration and type of test needs to be adjusted according to the SANS 10299-4:2003 standards.

6. Can I drink the water from my borehole?

Without knowing the quality of groundwater, it should not be consumed. Should the purpose of the water be for potable use the water sample obtained during the yield testing needs to be sent for chemical and microbial analysis according to the SANS 241-1: 2015 standards. The results from the analysis will determine the quality of the water and dictate whether treatment is required to make the water safe for consumption.

Generic treatment systems, easily available as off the shelf units, can be insufficient in treating the groundwater to within the standards for drinking water. Thus, should treatment be required, it is best to consult a water treatment engineer.

7. My water is turning my walls red. What can I do?

Red staining is caused by the presence of dissolved iron in groundwater. Once the iron is oxygenated by introducing oxygen into the system the iron will precipitate forming the observed red staining. This is the cause of much frustration and can have detrimental effects not only to your walls and pool but also to your borehole and pump.

The first part of solving this problem starts with the proper management of your borehole. The high iron concertation should first be observed in the results of the groundwater quality analysis. Should the results from the analysis suggest that iron is present in high concentrations (Typically above 0.3 mg/L), oxygenation of the borehole would need to be limited.

To limit the iron from precipitating on your walls or in your pool it is best to oxygenate the water prior to irrigation or filling of your pool. This can be achieved by pumping the water in a turbulent fashion, such as through a sprayer, into a settling tank. The iron will precipitate inside the tank and float to the bottom of the tank, thus decreasing the amount of iron in the water. For complete treatment, it is best to consult a water treatment engineer.

8. Should I license/register my borehole?

Under the Water Act of South Africa (Act 36 of 1998) groundwater is not a privately own commodity and the Department of Water and Sanitation is the custodian of our countries water resources. Thus, all water that is used for commercial purposes needs to be either registered under a general authorization or a water use license application needs to be lodged prior to use.

However, should the water be used for domestic purposes, the use falls under Schedule 1 of the Act and thus, no registration at the Department of Water and Sanitation is required. Local municipalities may request that the borehole be registered with the municipality, thus, it is required to obtain the local regulations that applies to your area from your local municipality.

9. How do I know what is happening in my borehole?

Once a borehole has been drilled and equipped the assumption exists that the project is complete, your water supply is secure and no further attention needs to be given to the borehole. This assumption can lead to catastrophic outcomes for the expensive investment that was made. A borehole like any other resource needs to be managed. This is a difficult task if one cannot see what is happening underground. Thus, it is recommended to equip every borehole with a monitoring system, be it manual monitoring or an automatic system.

The information obtained by monitoring will play a key role in managing the borehole to ensure that the resource is used sustainably and to ensure that you get the most from your investment. Read more about our general guidelines towards groundwater and borehole monitoring and management.

Boreholes for domestic use

Drilling a borehole and using groundwater for domestic use can be a daunting process. Should it be approached in the wrong way, it can lead to large financial losses and minimal gain in water security. However, with knowledge of the process or with the guidance of a qualified hydrogeologist, the project can be less stressful and the risks associated can be minimized. Groundwater is a resource that can benefit everyone should it be developed and managed correctly and sustainably.

If you are looking for help with drilling a commercial or domestic borehole please contact us on:  info@geoss.co.za

Thank you for the final version of this report. I’ve cross-checked my previous comments and they have been addressed more than adequately. This is a top quality final product.

We’ll take it forward from here as part of the overall SEA, and building an effective model for managing development and maintaining ecosystem services into the future.